Oh, is this still happening? Is hockey still a thing? I was too busy having barbecues and drinking Flying Dog Barrel-Aged Imperial Porter and wearing flip-flops and liberally smearing SPF 250 all over myself to notice. Who even made the finals? It was the Pens and the Kings, right?

Ahh, the Chicago Blackhawks and the Boston Bruins. The #2 and #4 best possession teams in the league. The regular-season dominating Hawks and some jackholes from a city we’d normally be allowed to call a cesspit but some ultra-jackholes spoiled that, so now we have to pretend to be nice. Yay for Boston. Their accents are endearing, and Ben Affleck totally didn’t ham up Daredevil.

Now we dance. One last time, Ian and I will offer our predictions for the winner of the Stanley Cup. The winner will bask in infinite glory until the dawn of the Second Age. The loser will have to eat 100 pennies.

How’d we do last round?

So basically, we’re tied. Ian won the first round, I won the second round, we tied the third round. If I had to give one of us the moral advantage, it’d be me because I’m me and also because I’ve gotten really lucky with dangerous picks while Ian has routinely picked overdogs at every turn because he is a coward who brings disgrace to his family.

Please consider the stakes before you read our predictions.

Peter: Hey, Los Angeles, I’m not mad, I’m just disappointed! When I saw the Kings burying their opponents in pucks early in the season, I became convinced they’d repeat as champions. I totally overlooked how their possession dominance eroded as the season went on, and that’s on me. But Chicago has genuinely surprised me in the breadth of their game. They’ve got stout defense and explosive offense. Even Patrick freaking Kane broke a too-long scoreless streak (and stole a goal from his teammate in the process). I think Chicago is primed to win this thing. Mostly because they’re good, but also because Boston is miserable. 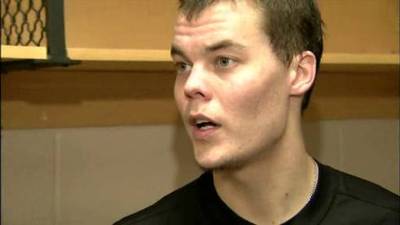 Yes, these are normal human cheekbones. No need to kneel before Zod.

Don’t get me wrong. Tuukka Rask is as great at goalie-ing. He’s even better at stopping pucks than he is at passing as a real human. Patrice Bergeron and Nathan Horton are genuinely awesome hockey players who are credits to their team. Chara is swell, and he’s gone nearly ten days without swallowing a wayward child whole, so there’s that.

But the rest of the team is not my cuppa. Brad Marchand is the Sean Avery of hockey. Milan Lucic is not as tough as he’s touted to be, and thoughts of Tyler Seguin make me insecure when I’m around women. I don’t even know how to spell Clod Julien’s name right. The Bs might have been the best team in the East, but that’s mostly because the rest of the conference was so uniformly disappointing this season. I mean, for crying out loud, the Toronto Maple Leafs almost beat the Bruins, and that club has been a fiasco for decades.

Chicago needs only not stoop to Boston’s level to win this thing. Don’t get involved in the billion inevitable post-whistle grab-ass sessions that will erupt with Marchand hits the ice. Keep skating like they have been all season. After all, the Chicago Blackhawks are the best hockey team in the league. The Boston Bruins should feel lucky just to have privilege to have a good view when the Hawks win it in 5.

Ian: Before the Baltimore Ravens entered the playoffs, Ray Lewis made an announcement. “I talked to my team today,” Lewis said on January 5th. “I talked to them about life in general. And everything that starts has an end. For me, today, I told my team that this will be my last ride.”

By last ride, Lewis meant he would retire at year’s end. When he made the announcement, I got this weird feeling. The Ravens were already a good team, but Ray Ray’s Last Ride was an emotional anchor, something the team could rally behind. They drew strength from that when things got tough. They could tell themselves, “We just can’t lose this one.” I knew they would win the Super Bowl. And they did.

Stuff like that brings team closer together, uniting them in a way that makes an otherwise ordinary team special. After the attacks in Boston earlier this year, you just know the Bruins would do anything to win a title. It’ll help heal the city. Each player will feel that pressure in the game’s deciding moments. The Bruins should be nearly impossible to beat at home.

But I am a superstitious person. Childishly so. And Jaromir Jagr shaving (part of) his beard before the Finals is just not something I can get past.

Patrick Kane is playing in a completely different stratosphere right now. Corey Crawford is giving Chicago the solid goaltending it needs to win. Marian Hossa… is this guy in the Finals every friggin’ year?

After seven hard-fought close games, it will be Tuukka Time. But not in the way Bruins fans think. Blackhawks in 7. Take it to #thebank.

Share your predictions below or just give us a hard time for ours. Whatever. See if we care.